Cure for Cancer by Immunotherapy !!! Beginning of a new era!

Cancer is a disease that causes end of many life despite the highest effort of doctors. Millions of people dies every year all over the world. It's surprisingly increasing and becoming a major concern for health sector. About 15 million new cases occur a year and it causes about 9 million death per year.

Until very recently, most cancer patients only had a few options for cancer treatment. They could get chemotherapy or radiotherapy or could have surgery to cut out the cells. But these treatments can be blunt as the instruments kill healthy cells along cancerous ones. They also carry devastating side effects and often fail in patients with late stage.

Among the ways that has been discovered so far there is one that is called  'Immunotherapy'. It provides a new hope in achieving the long cherishing dream of curing cancer. Cancer treatment by Immunotherapy is one of the latest inventions in this sector. 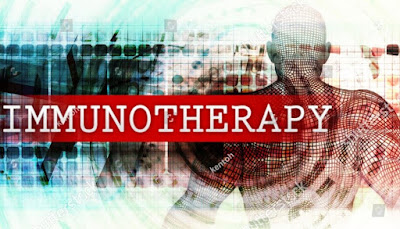 What is Immunotherapy for Cancer Treatment?

Our body has its own defense system. It acts like an army that is always in search of any foreign invader. If they find any invader that they can recognize, flags it and take necessary steps to get rid of it.

The cells that take Part in this defense is called White blood cell. White blood cell (WBC) are specific cells of blood that have the ability to kill cells that seems harmful to our body whatever it is a bacteria, parasite or foreign particle.

Immunotherapy is one type of cancer treatment, that boots our natural defense system to fight cancer. Immunotherapy works by several ways

How does immune cell kill invaders and harmful particles?

Check Out: Home Remedy for Hemorrhoids

Immune cells also secrete various chemicals that activate other immune cells and attracts them at the site of invasion and then kill the harmful particle. Basically Immunotherapy is a cancer treatment method where  medication is used to empower our immune system to treat cancer cells.

Various types of immune cells are present. Among them a cell is called T cell is considered as the main soldiers of  immune system that fight with cancer cell.

There are several types of protein on the surface of T cell that acts as immune braker, that pulls brake on T cell activity. If this protein activates, it stop T cell from being over-activated and protects our own cell from being harmed. Is protein called immune checkpoints, so that our body can shut the T cell down, when its needed.

Cancer cells express special types of molecules at their surface. That molecules can activate immune checkpoint and thus deactivate T cell. So T cell can not kill the cancerous cell. Thus the cancer cell can grow in size and number without being attacked. 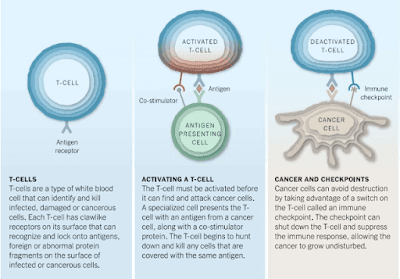 Checkpoint inhibitor : One step forward to the dream

This discovery has begun a new era in the history of  cancer treatment, these discoveries made it possible to develop drugs that would stop the checkpoint from activated by cancer cells, so T cell will be free to fight cancer. these process called taking the brakes off the immune system.

One of the approved checkpoint therapies was ipilimumab (brand name Yervoy). It targets protein CTLA-4 and prevents the cancer cells from activating it. Thus T-cell can develop the ability to stop the growth of cancer cell and kill it.

Drugs targeting PD-1 such as nivolumab (opdivo) and pembrolizumab (keytruda)– have been approved for the market.  these drug can treat advanced melanoma and lung cancer. it is proved to be strikingly effective in the fight against cancer.

By 2010,  some patients with advance melanoma saw their cancer disappear when using drugs from this research in clinical trials.

Former president jimmy carter received a PD-1 checkpoint inhibitor, keytruda, in 2015 when melanoma had spread to the brain and liver. In his last scan, showed no cancer.

A young women, Sharon Belvin, had been near death from melanoma. After only four doses of the drug that inhibit CLTA-4,  became completely free of disease.

Such success brings new hope in treating cancer and curing them.

Less chance of future return: In immunotherapy our body develops memory on cancer cell which protects our body from future return of the cancer.

Fewer side effect than other therapies: It has less side effect on our body as it works by boosting our immunity.

Drawbacks of therapy : A challenge of treatment

Despite all successes there are some side effects of these therapy. It can turn the fury of the immune system against the patients own tissue. So lung, intestine, even the heart can be inflamed. Thyroid gland may turn sluggish. Damage to the pancreas can cause diabetes. Some can develop rheumatoid arthritis.

This Immunotherapy is very costly also. It will take 1,00,000$ per year. So it is very difficult to bear the cost specially for the peoples of  poor and developing countries.

Five Facts about Immunotherapy for Cancer

Cancer is considered as the most vital challenge towards the medical science all over the world. On October 1, 2018 US scientist Dr. Allison, director of the Cancer Research Institute Scientific Advisory Council, along with Dr. Honjo, Distinguished Professor of KUIAS, was awarded Nobel prize 2018 in physiology. Karolinska Institute of Sweden declared it.

As a matter of fact this invention can come up with great success in the field of cancer treatment with further research.


Self Improvement from SelfGrowth.com

SelfGrowth.com is the most complete guide to information about Self Improvement on the Internet.